From the ground up – community environmental action 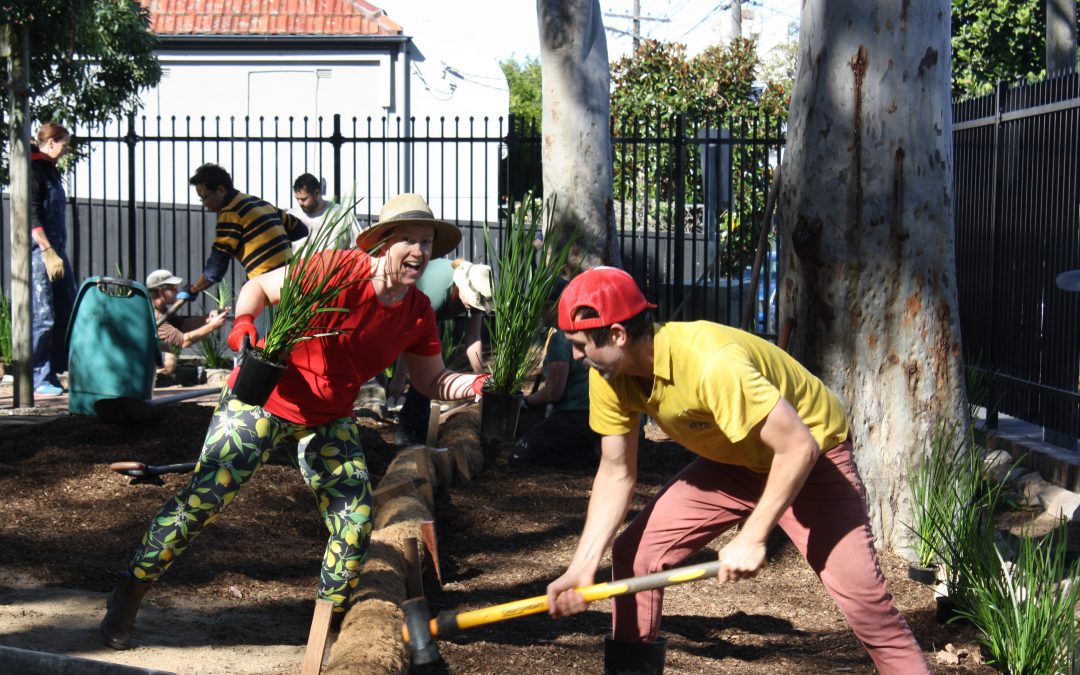 History Week this year is 4 to 12 September. The theme is ‘from the ground up’ which celebrates the achievements of local groups in creating positive change in communities. The Inner West has a long history of grassroots activism from peace marches to LGBTQI and mental health advocacy, supporting multicultural communities and more. Inner West Council is sharing some of these stories in a series of History Week podcasts.

The Inner West also has a history of environmental activism, including so-called ‘quiet activism,’ in response to the climate crisis and other environmental issues. We asked some local groups to share their stories, and the impact they’ve had in the community.

In 2018 the Tempe Public School Parents and Citizens Association (P&C) obtained an Inner West Council Environment Grant for work to be completed in the area known as ‘Abbey’s Garden’. Over the decades Abbey’s Garden had been negatively impacted by soil erosion, drought, damage from play and neglect. This project aimed to increase the garden’s drought tolerance, biodiversity plantings and make the area safe to play in again.

In partnership with Inner West Council, contractors and Tempe Public School, the P&C up-skilled themselves in Water Sensitive Urban Design (WSUD) and coordinated a school-wide working bee to bring together learnings and resources around water conservation and management. The WSUD working bee created a dry creek bed and rainwater garden around new storm water pits which had been installed in 2019.

Sitting at the lowest point of the school below a basketball court and considerable paving, Abbey’s Garden takes enormous water run-off from the buildings and grounds of Tempe Public whenever it rains. Water rushes down time worn underground piping and over the landscape and used to pool at the bottom, rushing into local streets. It doesn’t do this any longer due to the WSUD upgrade. Extensive consultation and considerable financial input by the P &C helped upgrade storm water management in the area to reduce the overall impact of water erosion. Next steps included creatively using ground levels to improve water retention, biodiverse plantings and aesthetics in the garden.

Our advice to groups who might want to undertake similar work is:

The environmental and community outcomes from this project have been that damaging water run-off and erosion has been minimised and more water is being retained on the school grounds which is helping biodiversity. The area also looks great and is welcoming and safe for kids. It is inspiring to see that gardens with problem areas and water erosion can be mitigated by cost effective and simple means to help improve biodiversity locally. If we can do it, anybody can!

Climate Change Balmain-Rozelle is the group behind Climate in the Pub: a program of talks about various aspects of climate change. The talks started in 2015 at the Three Weeds in Rozelle then moved to the Merton Hotel and continue online via Zoom. Guest speakers have covered topics ranging from electric vehicles to divestment from fossil fuel funding.

From the start our mission has always been to inform people about the dangers of climate change, to speak out against the ongoing use of fossil fuels and to champion the growth, development and benefits of renewable energy sources.

The seeds of the group were sown in July 2005 at a global warming forum at Balmain Town Hall. A small group of local parents and residents began meeting with a view to creating a local action group. Climate Change Balmain-Rozelle was incorporated on Friday 3 February 2006. It was the first climate change action group in Australia to be run by local residents for local residents and has attracted media coverage in the Sydney Morning Herald and on ABC’s 7.30 report.

The group’s first project was fundraising to provide solar panels for local primary schools. Since those early years, the group’s activities have revolved around three main elements: spreading the word about the causes of the changing climate, the problems and solutions; listening to what local residents have to say; and passing those views on to politicians at all levels of government. We are affiliated with Climate Action Network Australia and the NSW Nature Conservation Council. In the 2018 NSW Environment Awards, the group received the Most Outstanding Member Group award.

We combine support for nationally-coordinated campaigns such as the School Strike for Climate and the Stop Adani campaign, with a strong focus on our local community.

For many years we had a stall at Council’s Footprints EcoFestival at White’s Creek Valley Park in Annandale. During election campaigns (Federal, State and Local) we have prepared informative policy comparison flyers. Between elections we meet with local politicians and their advisors, while members of our group prepare submissions to various enquiries and regularly write to newspapers. We support Council’s moves to renewable energy and its declaration of a Climate Emergency. Activities that bring people together, such as a working bee to send Christmas cards with a climate-related message to every MP have inspired our members to more actions.

Currently the group sends a monthly newsletter to over 1,100 supporters on its email list and counts nearly 40 fully subscribed members. The website provides full details on how to join, or subscribe to our newsletter.

Ashfield Park Community Garden started in 2015. Council was not using the u-shaped raised beds which were the former greenhouse in Ashfield Park and some locals thought it would make a good community garden. The garden now includes the u-shaped beds, four surrounding beds and two large round garden beds. Garden members work together during working bees and then share the harvest.

Council assisted by paying insurance costs to start up and donated worm towers for composting, as there is no composting facility onsite. The garden faces some issues due to its location in a public park. Before it started the soil needed to be tested to ensure produce was safe, as there can be elevated lead levels. Sometimes there has been theft of soil and plants, and dogs off leash run through the garden which damages the garden and its produce.

The advice we’d give others wanting to start up a community garden is talk to Council and get a group of people together. It would not be possible with just a couple of people. The garden currently has 35 members. If you want to join our garden come along to a working bee (not being held during lockdown). You’ll find more information on the garden’s Facebook page and a membership form under the ‘About’ tab.

The environmental and community outcomes from this project are:

The community garden receives a very positive response from the community. Users of the park like to see what is growing in the garden, particularly as the park is being used more during lockdown.

Wires Inner West (IW) branch covers approximately 100 suburbs in 6 local government areas including Sydney CBD, the Balmain Peninsula, south to Tempe and west to Belfield. WIRES IW branch rescues and rehabilitates for over 5,000 native animals each year, who have been injured, misplaced or orphaned. This includes a wide variety of animals including possums, bats, reptiles and many bird species. Most of the care takes place in members’ homes however the branch is also responsible for two aviaries. These house orphaned possums that require feeding, aviary cleaning and foliage collection every day of the year.

WIRES IW currently has 70 active members and is always in need of more volunteers to assist with wildlife rescue and rehabilitation. If you are interested in joining WIRES IW, please read more about becoming a volunteer. Members also fundraise regularly to raise money for the provision of specialist food and equipment for animals in care in the Inner West.

For anyone wanting to contribute to wildlife health and wellbeing the first step is to join and do some training. Once you’ve decided to get involved there’s further training and you start rescuing animals in a supportive and nurturing environment. No knowledge is ever wasted so if you don’t want to take the next step you can help the branch with administration or fundraising and educate your friends and neighbours.  You will also know who to call and what to do if you find an animal in distress.

Any effort, no matter how small, that helps improve the environment or helps our wildlife should be applauded and encouraged: from planting natives in your garden to writing to your political representative to ask for action on climate change.  WIRES IW has always worked closely with Inner West Council, staff and state government agencies. The strong relationship it has with local councils has facilitated the planting of more native street trees allowing animals such as the ringtail possum to return to the area. The Council’s promotion of native trees for private gardens has also helped local wildlife in the Inner West.

Data collected by WIRES IW shows meaningful trends triggered by climate change through extreme weather, changes in seasons and changes to street plantings. In addition, there are challenges to habitat from a growing urban sprawl.

“Climate change is very present in our data showing the impact on our animals, the earlier breeding cycles, etc. When I started, we used to be quiet from March to September. By the time spring came around we were eager for rescues. Now we have no break, and this can be a huge toll on members.” Brigette Sharp

WIRES IW was the first branch to work with Men’s Sheds to build marine wood quality possum boxes and came up with the system now in use. WIRES IW would like to thank the students from Southern Cross Catholic Vocational college, Burwood for making their possum boxes under their teacher’s instruction. WIRES IW works with Council to place nest boxes in the Inner West as part of Council’s broader nest box program that provides nest boxes for possums, microbats and birds.